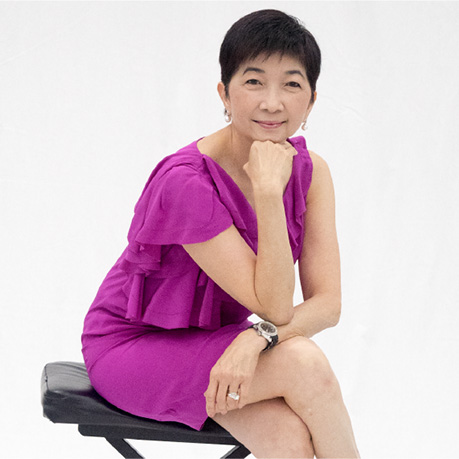 As a professional dancer, Rosalind had danced in pieces by distinguished choreographers.  Upon her return from the RAD, she was much sought after as a teacher and choreographer. She began her teaching career as Head of Dance, Ballet Mistress and Principal Teacher at various established Dance Institutions and Companies both in Singapore and Hong Kong.  Her works “Tango …. In Contemplation” and “Chorus Line” were widely acclaimed by the South China Morning Post in Hong Kong.

Her other choreographies, “Bach goes to Town … in Dance” and “Parody of Dance” were chosen to be featured at the Singapore Festival of Dance.  Some of the other pieces – “You Raise Me Up”, “Dance with Me”, “The Four Moons”, “The Lord’s Prayer” and “Tango” have been widely performed.

As a Teacher and Mentor, Rosalind has nurtured many dancers and teachers.  Her students have been showcased in various prestigious performances and Competitions and were awarded scholarships.  Under her tutelage, the students have travelled widely to Asia, Europe and Australia competing and winning several awards.

To date, she is a reputable Dance Educator having tutored several cohorts, since 2004, in the RAD Certificate in Ballet Teaching Studies and piloting Dance as an academic subject in school.  As the first RAD, Silver Swan Licensee in Singapore, she believes that one is never too old to dance and that dance induces resurgence of youth!

She is a strong advocate of Dance “being more than just dance” as several students have gained not only in their becoming good dancers but also their holistic growth as determined, disciplined and motivated persons.  Most importantly inculcating positive confident, excellent values and of course, the love of dance!